Where Men Only Dare to Go: Or the Story of a Boy Company, CSA 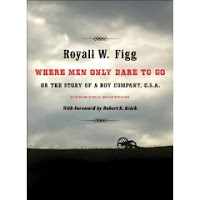 From the publisher:
First published in 1885 and long out of print, Where Men Only Dare to Go by Royall W. Figg remains a classic memoir of Confederate service.

This updated edition, with a new foreword by historian Robert K. Krick, brings Figg's captivating narrative back into print. Figg tells the story of Captain William W. Parker's Virginia battery, a significant Confederate unit that participated in every important engagement fought by the Army of Northern Virginia. Comprised mainly of young men, it became known as "Parker's Boy Battery." Figg joined the company at age twenty as a charter member at the battery's initial muster on March 14, 1862. He appears on each of the battery's fourteen bimonthly muster rolls from March 1862 to February 1865--an unusually devoted service record. His devotion is evident in the detailed accounting he provides of the battery's history, a vivid and engaging record of the experiences of a Confederate artillerist providing a rich blend of bravery, rascally behavior, and drollery.

J. Thompson Brown, the last commander of Parker's Virginia Battery, described Figg as "a fair representative of our Company, an intelligent fairly educated boy. . . . He was a truthful and Christian gentleman. . . . I believe what he says, as no man could doubt Royal W. Figg's statement." The reappearance of Where Men Only Dare to Go after so many years offers a new generation a chance to read the eyewitness report of this bright, observant young soldier who fought through the famous battles in the eastern theater.