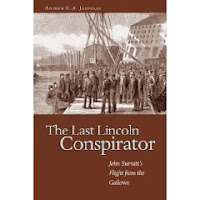 From the publisher:
Despite all that has been written about the April 1865 assassination of President Abraham Lincoln, the story of John Surratt--the only conspirator who got away--remains untold and largely unknown.

The capture and shooting of John Wilkes Booth twelve days after he shot Lincoln is a well-known and well-covered story. The fate of the eight other accomplices of Booth has also been widely written about. Four, including Surratt's mother, Mary, were convicted and hanged, and four were jailed. John Surratt alone managed to evade capture for twenty months and escape punishment once he was put on trial. In this tale of adventure and mystery, Andrew Jampoler tells what happened to that last conspirator, who after Booth's death became the most wanted man in America.

As the first full-length treatment of Surratt's escape, capture, and trial, the book provides fascinating details about his flight from New York, where he was on a Confederate spy mission scouting the huge Union prisoner of war camp in Elmira, through eastern Canada to a hideout in Liverpool, England, and on to France and the Papal States. His twenty-month flight, including nearly one year of enlisted service in the Papal Zouaves (the pope's army), is a remarkable adventure through mid-century Europe and locations unknown to most Americans of the time. Despite an uncontrollable tendency to babble to strangers about who he really was and what he had done, Surratt, frequently sheltered by sympathetic Roman Catholic priests, managed to stay at large during a flight that took him across three continents and over the Atlantic Ocean and half the Mediterranean Sea. Finally caught in Alexandria, Egypt, he was returned to Washington to stand trial in 1867.

Jampoler brings Surratt to life as he traces the wily young man's remarkable journey and the bitter legal proceedings against him that bizarrely led to his freedom. After his trial, Surratt lived out his life peacefully in Baltimore, marrying a relative of Francis Scott Key and dying at the age of seventy-two. The book's cast of characters includes a menagerie of the nineteenth century's most colorful personalities.

ANDREW C.A. JAMPOLER is also the author of the award-winning book Adak as well as Sailors in the Holy Land. After retiring from the U.S. Navy, he became a sales and marketing executive in the international aerospace industry. Now a resident of Loudoun County, VA, he has been writing full time for a decade.