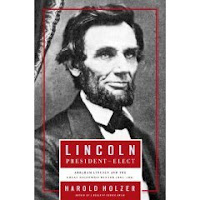 From the publisher:
One of our most eminent Lincoln scholars, winner of a Lincoln Prize for his Lincoln at Cooper Union, examines the four months between Lincoln's election and inauguration, when the president-elect made the most important decision of his coming presidency -- there would be no compromise on slavery or secession of the slaveholding states, even at the cost of civil war.

Abraham Lincoln first demonstrated his determination and leadership in the Great Secession Winter -- the four months between his election in November 1860 and his inauguration in March 1861 -- when he rejected compromises urged on him by Republicans and Democrats, Northerners and Southerners, that might have preserved the Union a little longer but would have enshrined slavery for generations. Though Lincoln has been criticized by many historians for failing to appreciate the severity of the secession crisis that greeted his victory, Harold Holzer shows that the president elect waged a shrewd and complex campaign to prevent the expansion of slavery while vainly trying to limit secession to a few Deep South states.

During this most dangerous White House transition in American history, the country had two presidents: one powerless (the president-elect, possessing no constitutional authority), the other paralyzed (the incumbent who refused to act). Through limited, brilliantly timed and crafted public statements, determined private letters, tough political pressure, and personal persuasion, Lincoln guaranteed the integrity of the American political process of majority rule, sounded the death knell of slavery, and transformed not only his own image but that of the presidency, even while making inevitablethe war that would be necessary to make these achievements permanent.

Lincoln President-Elect is the first book to concentrate on Lincoln's public stance and private agony during these months and on the momentous consequences when he first demonstrated his determination and leadership. Holzer recasts Lincoln from an isolated prairie politician yet to establish his greatness, to a skillful shaper of men and opinion and an immovable friend of freedom at a decisive moment when allegiance to the founding credo "all men are created equal" might well have been sacrificed.

Harold Holzer has authored, coauthored, and edited twenty-two books on Abraham Lincoln and the Civil War, including The Lincoln Image, Lincoln Seen and Heard, Dear Mr. Lincoln: Letters to the President, Lincoln as I Knew Him, and Lincoln on Democracy. Holzer, who is vice president for communications and marketing at The Metropolitan Museum of Art, lives in Rye, New York. Visit his website at haroldholzer.com.