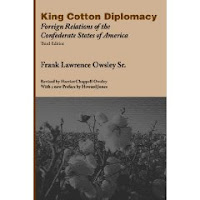 From the publisher:
"[T]he most important contribution that has so far been made to the diplomatic history of the United States during this period. Owsley recognizes the significance of economic forces underlying politics and diplomacy with the result that he has extended the scope of his study beyond the documents and given a much more valid interpretation of the diplomatic history of this period" --Mississippi Valley Historical Review

The exhaustive, definitive study of Southern attempts to gain international support for the Confederacy by leveraging the cotton supply for European intervention during the Civil War. Using previously untapped sources from Britain and France, along with documents from the Confederacy's state department, Frank Owsley's King Cotton Diplomacy is the first archival-based study of Confederate diplomacy.

"On its initial publication King Cotton Diplomacy was hailed as a definitive study of Confederate foreign affairs. It was most highly acclaimed for its fresh interpretations of the reasons why England and France refused to grant recognition and aid to the Confederacy. Harriet Chappell Owsley presents a new and revised edition . . . and has in many places tightened and improved the literary style, but she has permitted the new volume to retain both the substance and the flavor of the earlier edition." --Mississippi Valley Historical Journal

"For the assistance given the Confederacy by British shipping interests, as well as for a definitive criticism of Confederate and Northern policy, consult King Cotton Diplomacy by Frank Lawrence Owsley."
--Time Magazine

Frank Lawrence Owsley (1890-1956) taught at Auburn, Birmingham-Southern, and then at Vanderbilt for 29 years before becoming the first incumbent of the Hugo Friedman Chair in Southern History at The University of Alabama in 1949. His other works include States Rights in the Confederacy and Plain Folk of the Old South.

From CWBN:
This is a revision of the 1931 classic.