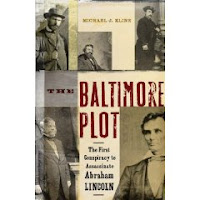 From the publisher:
A True-Crime Thriller About the Original Attempt on President Lincoln's Life

In February 1861, Abraham Lincoln's private train steamed from Illinois to Washington, DC, where he would be inaugurated as the sixteenth president of the United States. In Baltimore, where Lincoln's train was scheduled to make a final stop before arriving at the capital, the renowned detective Allan Pinkerton had uncovered evidence of a conspiracy to assassinate the president-elect.

A border state with pro-Southern sympathies, Maryland was on the verge of leaving the Union and joining the Confederacy. Abraham Lincoln wanted desperately to restore a divided Union; eliminating him would tear the country irreparably apart. Long a site of civil unrest, Baltimore--the home of John Wilkes Booth (who may have been among the conspirators)--provided the perfect environment for a strike. Wearing a disguise, in the dead of night, and under armed guard, Lincoln did pass through Baltimore without incident, but at a steep price. Although Pinkerton was able to identify some of the conspirators, the case was never brought to trial. Ridiculed by the press for "cowardice" and the fact that no conspirators were charged, Lincoln would never hide from the public again. Four years later, when he sat in full view in the balcony of Ford's Theater, another conspiracy succeeded.

One of the great mysteries of the Civil War and long a source of fascination among Lincoln scholars, the Baltimore Plot has never been critically investigated until now. In The Baltimore Plot: The First Conspiracy to Assassinate Abraham Lincoln, Michael J. Kline turns his legal expertise to sifting through primary sources in order to determine the extent of the conspiracy and culpability of the many suspects surrounding the case. Full of memorable characters and intriguing plot twists, the story is written as an unfolding criminal investigation in which the author determines once and for all whether there was a true plot and if the perpetrators could have been brought to trial.