The Problem of Emancipation: The Caribbean Roots of the American Civil War 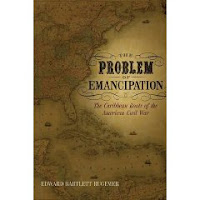 From the publisher:
While many historians look to internal conflict alone to explain the onset of the American Civil War, in The Problem of Emancipation, Edward Bartlett Rugemer places the origins of the war in a transatlantic context. Addressing a huge gap in the historiography of the antebellum United States, he explores the impact of Britain's abolition of slavery in 1834 on the coming of the war and reveals the strong influence of Britain's old Atlantic empire on the United States' politics. He demonstrates how American slaveholders and abolitionists alike borrowed from the antislavery movement developing on the transatlantic stage to fashion contradictory portrayals of abolition that became central to the arguments for and against American slavery.

In this ground-breaking study, Rugemer examines how southern and northern American newspapers covered three slave rebellions that preceded British abolition--and how American public opinion shifted radically as a result. For example, American slaveholders learned from the Haitian Revolution and a series of West Indian slave rebellions that abolitionist agitation led to insurrection. When American slaves began reacting to antislavery rhetoric, slaveholders feared the Caribbean pattern of agitation and revolt had spread to the United States. In 1822 after the fierce debates over Missouri, several Charleston slaves conspired to seize their city, and in 1831 Nat Turner led a bloody revolt shortly after William Lloyd Garrison published his radical abolitionist newspaper, the Liberator. Turning fear into action, American slaveholders seized and burned the publications that abolitionists sent southward in the mail, and in the North, the partisans of slavery mobbed abolitionist meetings and silenced the discussion of slavery in Congress.

Abolitionists, by contrast, took inspiration from the developments abroad. Leaders such as William Lloyd Garrison, Frederick Douglass, Lydia Maria Child, and William Ellery Channing used the West Indian emancipation to help advance their position, and members of John Tyler's presidential administration pushed for the annexation of Texas. Believing that the British achieved emancipation by mobilizing the British people with a robust public relations campaign, many African Americans, often joined by white allies, staged annual celebrations of the First of August, the day the Parliament enacted abolition. The celebrations grew and spread throughout the North, facilitating the emergence of an antislavery constituency that bolstered the Republican Party of Abraham Lincoln in 1860.

Richly researched and skillfully argued, The Problem of Emancipation explores a long-neglected aspect of American slavery and the history of the Atlantic World and bridges a gap in our understanding of the American Civil War.

Edward Bartlett Rugemer is an assistant professor of history and African American studies at Yale University.