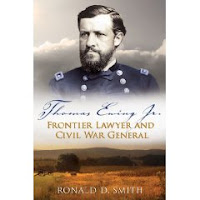 From the publisher:
The Ewings influenced the course of the Midwest for more than fifty years. Patriarch Thomas Ewing raised four major players in the nation s history including William Tecumseh Cump Sherman, taken in as a nine-year-old. Smith shows that Tom Jr. had a remarkable career of his own. He came to national prominence in the fight over the pro-slavery Lecompton Constitution, was instrumental in starting up the Union Pacific Railroad, and became the first chief justice of the Kansas Supreme Court. Ewing obtained a commission in the Civil War and issued the dramatic General Order No. 11 that expelled residents from sections of western Missouri. Then this confidant of Abraham Lincoln s went on to courageously defend three of the assassination conspirators and lobbied the key vote to block the impeachment of Andrew Johnson.

Ronald D. Smith is an attorney in Larned, Kansas.