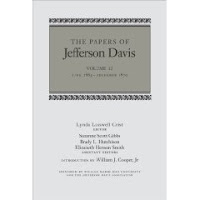 From the publisher:
"Being powerless to direct the current, I can only wait to see whither it runs," wrote Jefferson Davis to his wife, Varina, on October 11, 1865, five months after the victorious United States Army took him prisoner.

Indeed, in the tumultuous years immediately after the Civil War, Davis found himself more acted upon than active, a dramatic change from his previous twenty years of public service to the United States as a major political figure and then to the Confederacy as its president and commander in chief.

Volume 12 of The Papers of Jefferson Davis follows the former president of the Confederacy as he and his family fight to find their place in the world after the Civil War. A federal prisoner, incarcerated in a "living tomb" at Fort Monroe while the government decided whether, where, and by whom he should be tried for treason, Davis was initially allowed to correspond only with his wife and counsel. Released from prison after two hard years, he was not free from legal proceedings until 1869. Stateless, homeless, and without means to support himself and his young family, Davis lived in Canada and then Europe, searching for a new career in a congenial atmosphere. Finally, in November 1869, he settled in Memphis as president of a life insurance company and, for the first time in four years, had the means to build a new life.

Throughout this difficult period, Varina Howell Davis demonstrated strength and courage, especially when her husband was in prison. She fought tirelessly for his release and to ensure their children's education and safety. Their letters clearly demonstrate the Davises' love and their dependence on each other. They both worried over the fate of the South and of family members and friends who had suffered during the war.

Though disfranchised, Davis remained careful but not totally silent on the subject of politics. Even while in prison, he wrote without regret of his decision to follow Mississippi out of the Union and of his unswerving belief in the constitutionality of state rights and secession. Likewise, he praised all who supported the Confederacy with their blood and who, like himself, had lost everything.