The Fate of Texas: The Civil War in the Lone Star State 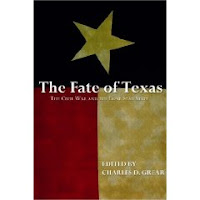 From the publisher:
In its examination of a state too often neglected by Civil War historians, The Fate of Texas presents Texas as a decidedly southern, yet in many ways unusual, state seriously committed to and deeply affected by the Confederate war effort in a multitude of ways. When the state joined the Confederacy and fought in the war, its fate was uncertain. The war touched every portion of the population and all aspects of life in Texas. Never before has a group of historians examined the impact of the war on so many facets of the state.

The eleven essays in this collection present cutting edge, original research by noted historians, who provide a new understanding of the role and reactions of Texas and Texans to the war. The book covers a wide range of topics, providing new perspectives, ranging from military, social, and cultural history to public history and historical memory. Some of the subjects explored include the lives of Texas women, slavery, veterans, and how the state dealt with confederate loss.

"A well conceived and highly important addition to Civil War literature. . . . [that] offers a complex, multi-dimensional, yet thoroughly accessible set of major contributions to the historiography of the Civil War." --T. Michael Parrish, Baylor University