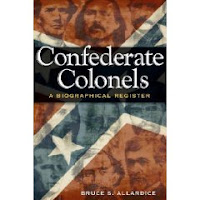 From the publisher:
This first comprehensive study of the Confederacy s colonels contains biographical articles on each of the 1,583 men who achieved the rank of full colonel by the end of their careers including both staff and line officers and members of all armies. Appendixes list state army colonels, colonels who became generals, and colonels whose rank cannot be proven. Allardice also explains how one became a colonel and exposes the inadequacies of the officer-nominating process, questions of seniority, and problems of rank inflation.

Bruce S. Allardice is an Adjunct Professor at South Suburban College and Moraine Valley Community College in Illinois and the author of More Generals in Gray and coauthor of Texas burial Sites of Civil War Notables. He lives in Des Plaines, Illinois.