Our Lincoln: New Perspectives on Lincoln and His World 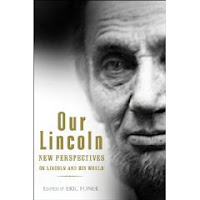 From the publisher:
Our best historians offer fresh insights on Abraham Lincoln and his time to mark the upcoming bicentennial of Lincoln's birth.

In 1876 the abolitionist Frederick Douglass observed, "No man can say anything that is new of Abraham Lincoln." Undeterred, the contributors to Our Lincoln believe it is possible even now, especially if the starting point is the interaction between the life and the times.

Several of these original essays focus on Lincoln's leadership as president and commander in chief. James M. McPherson examines Lincoln's deft navigation of the crosscurrents of politics and wartime strategy. Sean Wilentz assesses Lincoln's evolving position in the context of party politics. On slavery and race, Eric Foner writes of Lincoln and the movement to colonize emancipated slaves outside the United States. James Oakes considers Lincoln's views on race and citizenship. There are also brilliant essays on Lincoln's literary style, religious beliefs, and family life. The Lincoln who emerges is a man of his time, yet able to transcend and transform it—a reasonable measure of greatness.

Eric Foner is the DeWitt Clinton Professor of History at Columbia University. His many award-winning books focus on the Civil War and Reconstruction periods. He lives in New York City.