Saving Savannah: The City and the Civil War 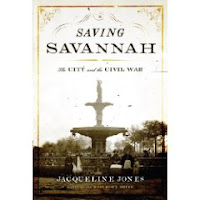 From the publisher:
A panoramic portrait of the city of Savannah before, during, and after the Civil War—a poignant story of the African American freedom struggle in this prosperous southern riverport, set against a backdrop of military conflict and political turmoil. Jacqueline Jones, prizewinning author of the groundbreaking Labor of Love, Labor of Sorrow, has written a masterpiece of time and place, transporting readers to the boisterous streets of this fascinating city.

Drawing on military records, diaries, letters, newspapers, and memoirs, Jones brings Savannah to life in all its diversity, weaving together the stories of individual men and women, bankers and dockworkers, planters and field hands, enslaved laborers and free people of color. The book captures in vivid detail the determination of former slaves to integrate themselves into the nation’s body politic and to control their own families, workplaces, churches, and schools. She explains how white elites, forestalling democracy and equality, created novel political and economic strategies to maintain their stranglehold on the machinery of power, and often found unexpected allies in northern missionaries and military officials.

Jones brilliantly describes life in the Georgia lowcountry—what it was like to be a slave toiling in the disease-ridden rice swamps; the strivings of black entrepreneurs, slaves and free blacks alike; and the bizarre intricacies of the slave-master relationship. Here are the stories of Thomas Simms, an enslaved brickmason who escapes to Boston only to be captured by white authorities; Charles Jones Jr., the scion of a prominent planter family, who remains convinced that Savannahis invincible even as the city’s defenses fall one after the other in the winter of 1861; his mother, Mary Jones, whose journal records her horror as the only world she knows vanishes before her; Nancy Johnson, an enslaved woman who loses her family’s stores of food and precious household belongings to rampaging Union troops; Aaron A. Bradley, a fugitive slave turned attorney and provocateur who defies whites in the courtroom, on the streets, and in the rice fields; and the Reverend Tunis G. Campbell, who travels from the North to establish self-sufficient black colonies on the Georgia coast.

Deeply researched and beautifully written, Saving Savannah is a powerful account of slavery’s long reach and the way the war transformed this southern city forever.