Now the Drum of War: Walt Whitman and His Brothers in the Civil War 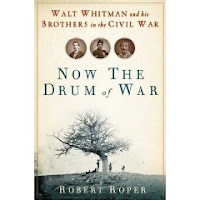 From the publisher:
The Civil War is seen anew, and a great American family brought to life, in Robert Roper’s brilliant evocation of the Family Whitman.

Walt Whitman’s work as a nurse to the wounded soldiers of the Civil War had a profound effect on the way he saw the world. Much less well known is the extraordinary record of his younger brother, George Washington Whitman, who led his men in twenty-one major battles—from Antietam to Fredericksburg, Vicksburg to the Wilderness—almost to die in a Confederate prison camp as the fighting ended. Drawing on the searing letters that Walt, George, their mother Louisa, and their other brothers, wrote to each other during the conflict, and on new evidence and new readings of the great poet, Now the Drum of War chronicles the experience of an archetypal American family—from rural Long Island to working-class Brooklyn—enduring its own long crisis alongside the anguish of the nation. Robert Roper has constructed a powerful narrative about America’s greatest crucible, and a compelling, braided story of our most original poet and one of our bravest soldiers.

Robert Roper has won awards for his fiction and nonfiction alike. His most recent book, Fatal Mountaineer, a biography of the American climber/philosopher, Willi Unsoeld, won the 2002 Boardman-Tasker Prize given by London’s Royal Geographical Society. His works of fiction include Royo County, On Spider Creek, Mexico Days, The Trespassers, and Cuervo Tales, which was a New York Times Notable Book in. He has won prizes or grants from the NEA, the Ingram-Merrill Foundation, the Joseph Henry Jackson Competition, and the British Alpine Club. His journalism appears in the New York Times, Los Angeles Times, Outside, Men’s Journal, National Geographic, and others. He teaches at Johns Hopkins, and lives in Baltimore and California.