Confederate Phoenix: Rebel Children and Their Families in South Carolina 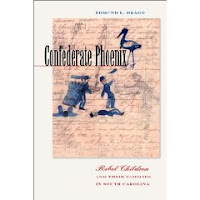 From the publisher:
In this innovative book, Edmund L. Drago tells the first full story of white children and their families in the most militant Southern state where the Civil War erupted.

Drawing on a rich array of sources, many of them formerly untapped, Drago shows how the War transformed the domestic world of the white South. Households were devastated by disease, death, and deprivation. Young people took up arms like adults, often with tragic results. In their play, boys at the Charleston Depot killed more civilians in South Carolina than Sherman's troops did. Thousands of fathers and brothers died in battle; many returned home with grave physical and psychological wounds. Widows and orphans often had to fend for themselves.

From the first volley at Fort Sumter in Charleston harbor to the end of Reconstruction, Drago explores the extraordinary impact of war and defeat on the South Carolina home front. He covers a broad spectrum from the effect of "boy soldiers" on the ideals of childhood and child rearing to changes in education, marriage customs, and community as well as family life. He surveys the children's literature of the era, and explores the changing dimensions of Confederate patriarchal society. By studying the implications of the War and its legacy on cultural memory, Drago unveils the conflicting perspectives of South Carolina children-white and black--today.