The Mexican War Diary and Correspondence of George B. McClellan 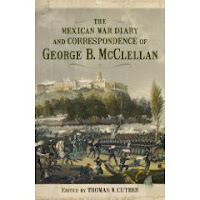 From the publisher:
In his standard reference work on the Civil War, Generals in Blue, Ezra Warner declared George B. McClellan (1826-1885) "one of the most controversial figures in American military history." In this revealing book, Thomas W. Cutrer provides the definitive edition of McClellan's detailed diary and letters from his service in the Mexican War (1846-1848), during which he began the rise that culminated in his being named general in chief of the Union forces and commander of the Army of the Potomac early in the Civil War.

McClellan graduated second in his class from West Point in 1846 and served as a second lieutenant in Company A of the prestigious Corps of Engineers, the only formation of combat engineers in the United States Army. The company participated in Major General Winfield Scott's invasion of Mexico, playing a prominent role in the siege of Vera Cruz and the battles of Cerro Gordo, Churubusco, Molino del Rey, and Chapultepec and in the capture of Mexico City. Although only twenty-one years old at the war's end, McClellan earned brevet promotions to first lieutenant and then captain for his efforts.

McClellan's colorful diary and frequent letters to his socially and politically prominent Philadelphia family provide a wealth of military details of the campaign, insights into the character of his fellow engineers--including Robert E. Lee and P. G. T. Beauregard--and accounts of the friction that arose between the professional soldiers and the officers and men of the volunteer regiments that made up Scott's command. A courageous, indefatigable, and superbly intelligent young man, McClellan formed close personal loyalties in those years. His diaries also reveal a man contemptuous of those he perceived as less talented than he, quick to see conspiracies where none existed, and eager to place upon others the blame for his own shortcomings and to take credit for actions performed by others.

On the banks of the Rio Grande during his first weeks with the army, McClellan wrote in his diary: "I came down here with high hopes, with pleasing anticipations of distinction, of being in hard fought battles and acquiring a name and reputation as a stepping stone to a still greater eminence in some future and greater war." Carefully edited by Thomas W. Cutrer, these diary entries and letters do indeed trace McClellan's rapid development as a soldier and leader and put on full display the talent, ambition, and arrogance that characterized his career as general and politician.

Thomas W. Cutrer is professor of history and American studies at Arizona State University West in Phoenix. He is the author, editor, or coeditor of seven other books, including Brothers in Gray: The Civil War Letters of the Pierson Family, which he coedited with T. Michael Parrish.