Gustavus Vasa Fox of the Union Navy: A Biography 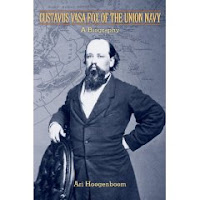 From the publisher:
This magisterial biography recounts the life and career of one of the U.S. Navy's most influential officers, Gustavus Vasa Fox. Ari Hoogenboom's examination of Fox's incredible life and distinguished career creates a vivid portrait of the man most responsible for the U.S. Navy's stellar performance in the Civil War.

Fox's naval service began in 1838 when he went to sea as a midshipman. He sailed in the Mediterranean, off the coast of Africa, in the Gulf of Mexico, and with the East India Squadron in the Pacific. By participating in the Coast Survey and by navigating the lower Mississippi River in the 1850s, as captain of a steamer that ran from New York to Havana to New Orleans and back, Fox gained valuable experience that would serve him well in the Civil War.

During the war, Fox was instrumental in mounting the blockade of the southern coast, from the Chesapeake Bay to the Rio Grande. After the battle between the Monitor and the Virginia, Fox championed ironclad technology despite having to contend with an officer corps wedded to wooden ships. In planning and coordinating expeditions, Fox deserves much of the credit for the navy's successes at Hatteras, Port Royal, New Orleans, Mobile Bay, and Fort Fisher.

Initially neither proslavery nor antislavery, Fox was passionately committed to the preservation of the Union and, as black sailors made a crucial contribution toward that end, became an advocate of freedom and voting rights for African Americans. A skilled administrator who understood both the demands of politicians and the needs of line officers, he was able to communicate effectively with each group. Fox developed a close and collegial working relationship with Abraham Lincoln and was related by marriage to the postmaster general. Along with officers like Quartermaster General Montgomery Meigs and coordinator of military railroads Herman Haupt, Fox played a critical but underappreciated role in the Union victory.

"At last, we have a full length and skillfully rendered portrait of Gus Fox, who acted as the de facto Chief of Naval Operations during the Civil War. This is must reading for anyone interested in the naval aspects of the Civil War." -- Craig L. Symonds, author of Lincoln and His Admirals