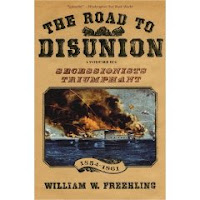 From the publisher:
Here is history in the grand manner, a powerful narrative peopled with dozens of memorable portraits, telling this important story with skill and relish. Freehling highlights all the key moments on the road to war, including the violence in Bleeding Kansas, Preston Brooks's beating of Charles Sumner in the Senate chambers, the Dred Scott Decision, John Brown's raid on Harper's Ferry, and much more.

As Freehling shows, the election of Abraham Lincoln sparked a political crisis, but at first most Southerners took a cautious approach, willing to wait and see what Lincoln would do--especially, whether he would take any antagonistic measures against the South. But at this moment, the extreme fringe in the South took charge, first in South Carolina and Mississippi, but then throughout the lower South, sounding the drum roll for secession.

Indeed, The Road to Disunion is the first book to fully document how this decided minority of Southern hotspurs took hold of the secessionist issue and, aided by a series of fortuitous events, drove the South out of the Union. Freehling provides compelling profiles of the leaders of this movement--many of them members of the South Carolina elite. Throughout the narrative, he evokes a world of fascinating characters and places as he captures the drama of one of America's most important--and least understood--stories. The long-awaited sequel to the award-winning Secessionists at Bay, which was hailed as "the most important history of the Old South ever published," this volume concludes a major contribution to our understanding of the Civil War. A compelling, vivid portrait of the final years of the antebellum South, The Road to Disunion will stand as an important history of its subject.

"This sure-to-be-lasting work--studded with pen portraits and consistently astute in its appraisal of the subtle cultural and geographic variations in the region--adds crucial layers to scholarship on the origins of America's bloodiest conflict." -- The Atlantic Monthly

"Splendid, painstaking account...and so a work of history reaches into the past to illuminate the present. It is light we need, and we owe Freehling a debt for shedding it." -- Washington Post