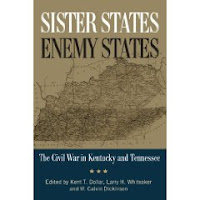 From the publisher:
The fifteenth and sixteenth states to join the United States of America, Kentucky and Tennessee were cut from a common cloth—the rich region of the Ohio River Valley. Abounding with mountainous regions and fertile farmlands, these two slaveholding states were as closely tied to one another, both culturally and economically, as they were to the rest of the South.

Yet when the Civil War erupted, Tennessee chose to secede while Kentucky remained part of the Union. The residents of Kentucky and Tennessee felt the full impact of the fighting as warring armies crossed back and forth across their borders. Due to Kentucky’s strategic location, both the Union and the Confederacy sought to control it throughout the war, while Tennessee was second only to Virginia in the number of battles fought on its soil. Additionally, loyalties in each state were closely divided between the Union and the Confederacy, making wartime governance—and personal relationships—complex.

In Sister States, Enemy States: The Civil War in Kentucky and Tennessee, editors Kent T. Dollar, Larry H. Whiteaker, and W. Calvin Dickinson explore how the war affected these two crucial states, and how they helped change the course of the war. Essays by prominent Civil War historians, including Benjamin Franklin Cooling, Marion Lucas, Tracy McKenzie, and Kenneth Noe, add new depth to aspects of the war not addressed elsewhere.

The collection opens by recounting each state’s debate over secession, detailing the divided loyalties in each as well as the overt conflict that simmered in East Tennessee. The editors also spotlight the war’s overlooked participants, including common soldiers, women, refugees, African American soldiers, and guerrilla combatants. The book concludes by analyzing the difficulties these states experienced in putting the war behind them.

The stories of Kentucky and Tennessee are a vital part of the larger narrative of the Civil War. Sister States, Enemy States offers fresh insights into the struggle that left a lasting mark on Kentuckians and Tennesseans, just as it left its mark on the nation.

Kent T. Dollar is assistant professor of history at Tennessee Technological University and author of Soldiers of the Cross: Confederate Soldier-Christians and the Impact of War on their Faith.

Larry H. Whiteaker is professor emeritus of history at Tennessee Technological University and author of The Individual and Society in America.