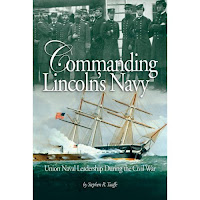 From the publisher:
The Union Navy played a vital role in winning the Civil War by blockading Confederate ports, cooperating with the Union Army in amphibious assaults, and controlling the Mississippi River and its tributaries. President Lincoln understood, however, that the Navy was not as important, militarily and politically, to the war effort as the Army, so he delegated authority to his Secretary of the Navy, Gideon Welles, who divided the Navy into six squadrons and hand-picked their commanders. This book examines Welles selections and why he appointed them. While noting that the officers records, character, and abilities were of primary importance, Taaffe acknowledges that political connections, seniority, and availability were also factored into the selections. He demonstrates that Welles appointments improved markedly as the war continued and as he gained a better understanding of the Navy and its officer corps. Taaffe contends that Welles eventual success in picking effective squadron commanders contributed greatly to Union victory.
Stephen R. Taaffe is a professor of history at Stephen F. Austin State University in Nacogdoches, TX. He holds MA and PhD degrees from Ohio University. He is also the author of the award-winning Commanding the Army of the Potomac, The Philadelphia Campaign, and MacArthur's Jungle War.