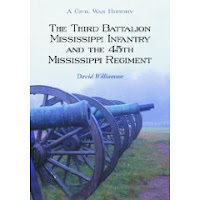 From the publisher:
This is an accounting of the experiences of the soldiers of Hardcastle's 3rd Battalion Mississippi Infantry from enlistment to the end of the war. It includes their mid-war incarnation as the 45th Mississippi Regiment and the role they played in Cleburne's fabled division during almost every major engagement of the Army of Tennessee. Told as much as possible from the point of view of the soldier, the book shows what motivated the original volunteers to join and continue fighting to the end.

"A labor of love...valuable" --The Civil War News

"An exhaustive study that cannot fail to impress the reader with the amount of research involved, mostly based on primary source material...detailed accounts of the battles and skirmishes...important...Williamson is to be congratulated...very complete" --Civil War Courier.

Freelance writer David Williamson is a graduate of the University of Akron (B.A.) and Tulane University (Ph.D.). He lives in Mississippi. --North & South