No Peace for the Wicked: Northern Protestant Soldiers and the American Civil War 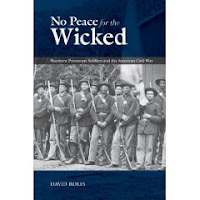 From the publisher:
In the spring of 1861, young men throughout the Northern states rallied around the Union flag, eager to punish the Confederate renegades who had brazenly inaugurated civil war by firing on Fort Sumter. Often driven by their Protestant religious beliefs, many northern soldiers believed they were enlisting in a just war to save their Christian government from a "wicked" Southern rebellion.

These Protestant soldiers' faith was severely tested by the hardships and tragedies they experienced in the Civil War. The vast majority easily justified their wartime service by reminding themselves and their loved ones that they were engaged in a holy cause to preserve the world's only Christian republic. Others were genuinely haunted by the horrific violence of a seemingly endless civil war, and began to entertain serious doubts about their faith.

The first comprehensive work of its kind, David Rolfs' No Peace for the Wicked sheds new light on the Northern Protestant soldiers' religious worldview and the various ways they used it to justify and interpret their wartime experiences. Drawing extensively from the letters, diaries and published collections of hundreds of religious soldiers, Rolfs effectively resurrects both these soldiers' religious ideals and their most profound spiritual doubts and conflicts. No Peace for the Wicked also explores the importance of "just war" theory in the formulation of Union military strategy and tactics, and examines why the most religious generation in U.S. history fought America's bloodiest war.

David Rolfs earned his doctorate at Florida State University and is currently an instructor of history at Maclay College Preparatory School in Tallahassee, Florida.