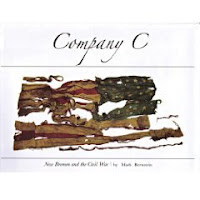 From the publisher:
In 1861, New Bremen, Ohio was a dot of a place a German-speaking hamlet settled by immigrants who came to America for cheap land, low taxes and to keep their sons out of the draft. Yet, when President Lincoln called for volunteers, forty-five sons of New Bremen enlisted to preserve a nation which many of them barely knew and whose language few of them spoke. Their experience was an odyssey. As Company C, 37th Ohio Volunteers, they fought in West Virginia, at Vicksburg, Chattanooga, Atlanta, and marched to the sea with Sherman.

The book is based on extensive research at the National Archives, scores of letters home and other original sources. The American Civil War was fought and won by the young men of thousands of places like New Bremen. By telling how and why these few fought, Company C illuminates the larger conflict. With 35 illustrations; five excellent maps.

Mark Bernstein writes on American history. His book Grand Eccentrics [Orange Frazer Press, 1996], tells the story of such turn-of-the century entrepreneurs and inventors as the Wright Brothers and Charles Kettering. Tom Crouch, senior curator, National Air & Space Museum: A fascinating account of an unconventional group who helped shape the history of the 20th century. His book World War II on the Air,[SourceBooks, 2003], is an account of Edward R. Murrow and the CBS radio correspondents in the European theatre. Published with an audio CD of famed broadcasts, narrated by Dan Rather of CBS News. A featured selection at the 2004 National Press Club Book Fair. Mike Wallace, 60 Minutes: I found this book and audio CD the most engrossing history lesson imaginable. He has also written for Smithsonian, Smithsonian Air & Space, American Heritage of Invention and Technology and other periodicals. He lives in Takoma Park, Maryland.