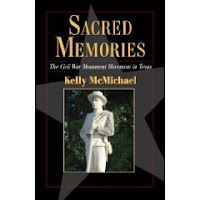 From the publisher:
War memorials are symbols of a community's sense of itself, the values it holds dear, and its collective memory. They inform us more, perhaps, about the period in which the memorials were erected than the period of the war itself.

Kelly McMichael, in her book, Sacred Memories: The Civil War Monument Movement in Texas, takes the reader on a tour of Civil War monuments throughout the state and in doing so tells the story of each monument and its creation. McMichael explores Texans' motivations for erecting Civil War memorials, which she views as attempts during a period of turmoil and uncertainty - 'severe depression, social unrest, the rise of Populism, mass immigration, urbanization, industrialization, imperialism, lynching, and Jim Crow laws' - to preserve the memory of the Confederate dead, to instill in future generations the values of patriotism, duty, and courage; to create a shared memory and identity 'based on a largely invented story'; and to 'anchor a community against social and political doubt'. Her focus is the human story of each monument, the characters involved in its creation, and the sacred memories held dear to them.

KELLY McMICHAEL is associate director of the Center for Learning Enhancement, Assessment, and Redesign at the University of North Texas. She lives in Denton, Texas.