A Wisconsin Yankee in the Confederate Bayou Country: The Civil War Reminiscences of a Union General 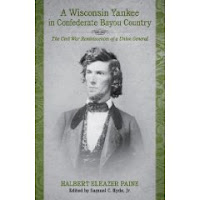 From the publisher:
General Halbert Eleazer Paine, commanding officer of the 4th Wisconsin Regiment of Volunteers, took part in most of the significant military actions in the lower Mississippi Valley during the Civil War. Nearly forty years after the conflict's end, Paine--a former schoolteacher and attorney who would become a three-term congressman--penned recollections of his wartime exploits, including his involvement in the Vicksburg campaign, the operations that resulted in the capture of New Orleans, the Battle of Baton Rouge, the Bayou Teche offensive, and the siege of Port Hudson. Now available for the first time, A Wisconsin Yankee in Confederate Bayou Country provides Paine's reflections and offer his excellent eyewitness account of the complexities of war.
Paine describes in detail the antiguerrilla operations he coordinated in southern Louisiana and Mississippi and his role in the defense of Washington, D.C., where he commanded a portion of the line during Confederate General Jubal Early's 1864 movement against the city. His experiences shed light on the daily struggle of the common solider and on the political and legal debates that dominated the times. In one striking episode, he describes his arrest for refusing to return to their masters fugitive slaves who entered his lines. He discusses the occupation of New Orleans and the relations between Federal soldiers and local slaves and provides definitive commentary on dramatic incidents such as the burning of Baton Rouge and the destruction of the ironclad ram C.S.S. Arkansas.

A departure from most accounts by Union army veterans, Paine's story includes less celebration of the grand cause and greater analysis of the motives for his actions--and their inherent contradictions. He sympathized with the many "contrabands" he encountered, for example, yet he callously dismissed a reliable servant for suggesting that the rebels fought well. Despite expressing kind feelings toward certain southern families, Paine all but condoned his troops' "excessive looting" of local homes and businesses, which he viewed as acceptable retribution for those who resisted Federal authority. After the war, Paine also served as commissioner of patents, championing innovations such as the introduction of typewriters into the Federal bureaucracy.

With a useful introduction and annotations by noted historian Samuel C. Hyde, Jr., A Wisconsin Yankee in Confederate Bayou Country reveals many of the subtle advantages enjoyed by the troops in blue, as well as the attitudes that led to behavior that left a violent legacy for generations.

Samuel C. Hyde, Jr., is a professor of history and the Leon Ford Endowed Chair at Southeastern Louisiana University. He is also the director of the Center for Southeast Louisiana Studies and the author or editor of several books, including Pistols and Politics: The Dilemma of Democracy in Louisiana's Florida Parishes, 1810-1899.