The Second United States Sharpshooters in the Civil War: A History and Roster 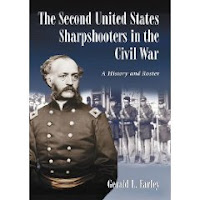 From the publisher:
The Second U.S. Sharpshooters was a hodgepodge regiment, composed of companies raised in several New England states. The regiment was trained for a specific mission and armed with specially ordered breech-loading target rifles. This book covers the origin, recruitment, training, and battle record of the regiment and features 32 photographs, four battlefield maps, and a regimental roster.

Gerald L. Earley is a lifelong student of the Civil War and has personally visited all the major battlefields of the Second U.S. Sharpshooters. He is a graduate of Wichita State University and a veteran of the Vietnam War.