The 10th Kentucky Volunteer Infantry in the Civil War: A History and Roster 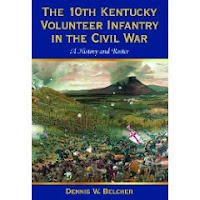 From the publisher:
The 10th Regiment Kentucky Volunteer Infantry waged battle for the Union for three years during the Civil War, ranging from its home state to Atlanta. This work is filled with personal accounts, including 25 war-time letters written by the men of the regiment, and official records of the regiment's activities, which included action at Chickamauga and Missionary Ridge. The regiment began the war with 867 men, suffered a 40-percent casualty rate at Chickamauga, and helped break Confederate lines at Jonesboro. At the end of the war only 140 men staggered home in victory. This title features more than 60 photos, 14 maps, rosters and descriptions of the unit's soldiers.