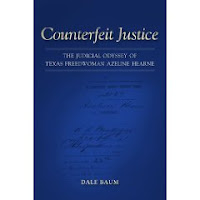 From the publisher:
For many of the forty years of her life as a slave, Azeline Hearne cohabitated with her wealthy, unmarried master, Samuel R. Hearne. She bore him four children, only one of whom survived past early childhood. When Sam died shortly after the Civil War ended, he publicly acknowledged his relationship with Azeline and bequeathed his entire estate to their twenty-year-old mulatto son, with the provision that he take care of his mother. When their son died early in 1868, Azeline inherited one of the most profitable cotton plantations in Texas and became one of the wealthiest ex-slaves in the former Confederacy. In Counterfeit Justice, Dale Baum traces Azeline's remarkable story, detailing her ongoing legal battles to claim and maintain her legacy.

As Baum shows, Azeline's inheritance quickly made her a target for predatory whites determined to strip her of her land. A familiar figure at the Robertson County District Court from the late 1860s to the early 1880s, Azeline faced numerous lawsuits--including one filed against her by her own lawyer. Samuel Hearne's family took steps to dispossess her, and other unscrupulous white men challenged the title to her plantation, using claims based on old Spanish land grants. Azeline's prolonged and courageous defense of her rightful title brought her a certain notoriety: the first freedwoman to be a party to three separate civil lawsuits appealed all the way to the Texas Supreme Court and the first former slave in Robertson County indicted on criminal charges of perjury. Although repeatedly blocked and frustrated by the convolutions of the legal system, she evolved from a bewildered defendant to a determined plaintiff who, in one extraordinary lawsuit, came tantalizingly close to achieving revenge against those who defrauded her for over a decade.


Due to gaps in the available historical record and the unreliability of secondary accounts based on local Reconstruction folklore, many of the details of Azeline's story are lost to history. But Baum grounds his speculation about her life in recent scholarship on the Reconstruction era, and he puts his findings in context in the history of Robertson County. Although history has not credited Azeline Hearne with influencing the course of the law, the story of her uniquely difficult position after the Civil War gives an unprecedented view of the era and of one solitary woman's attempt to negotiate its social and legal complexities in her struggle to find justice.

Baum's meticulously researched narrative will be of keen interest to legal scholars and to all those interested in the plight of freed slaves during this era.

Dale Baum is a professor of history at Texas A&M University. He is the author of The Shattering of Texas Unionism: Politics in the Lone Star State during the Civil War Era and The Civil War Party System: The Case of Massachusetts, 1848-1876.