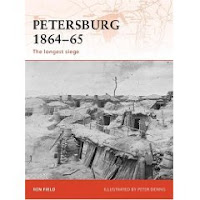 From the publisher:
In 1864 Petersburg, Virginia became the setting for one of the last great campaigns of the United States Civil War and the longest siege in American History. After his failure to capture Richmond in the Spring, General Ulysses S. Grant decided to strangle the life out of the Confederate Army of Northern Virginia by surrounding the city of Petersburg and cutting off General Robert E. Lee's supply lines.

The ensuing siege would carry on for nearly ten months, involve 160,000 soldiers, and see a number of pitched battles including the Battle of the Crater, Reams Station, Hatcher's Run, and White Oak Road. But around these battles were long days of living in trenches, enduring poor diet and winter weather, and suffering constant artillery bombardment. In April of 1865, Grant ordered a sweeping offensive against the beleaguered Confederates, which broke Lee's right flank and forced him to retreat to Appomattox Court House, where he surrendered a week later.

Written by an expert on the American Civil War, this book examines the last clash between the armies of U.S. Grant and Robert E. Lee.