The Sea King: The Last Confederate 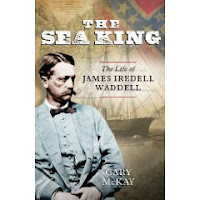 From the publisher:
Based on documents never before publicly accessible from the US Navy, the National Archives of the United States of America and the British Home Office, The Sea King is the first biography of one of the Civil War's most fascinating players.

As the rogue captain of the last Confederate commerce raider, the Shenandoah, James Waddell was a huge thorn in the side of the post-Civil war administration (they branded him a pirate and an enemy of the state), who singlehandedly destroyed the US whaling fleet, almost brought Britain and America to war, and finally surrendered after a 22,000-mile journey at Liverpool. Proclaimed an American hero upon his death in 1886 he was given the only state funeral ever awarded for a former Confederate officer.