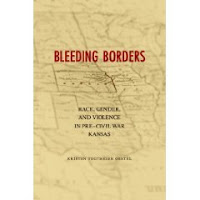 From the publisher:
In Bleeding Borders, Kristen Tegtmeier Oertel offers a fresh, multifaceted interpretation of the quintessential sectional conflict in pre-Civil War Kansas. Instead of focusing on the white, male politicians and settlers who vied for control of the Kansas territorial legislature, Oertel explores the crucial roles Native Americans, African Americans, and white women played in the literal and rhetorical battle between proslavery and antislavery settlers in the region. She brings attention to the local debates and the diverse peoples who participated in them during that contentious period.

Oertel begins by detailing the settlement of eastern Kansas by emigrant Indian tribes and explores their interaction with the growing number of white settlers in the region. She analyzes the attempts by southerners to plant slavery in Kansas and the ultimately successful resistance of slaves and abolitionists. Oertel then considers how crude frontier living conditions, Indian conflict, political upheaval, and sectional violence reshaped traditional Victorian gender roles in Kansas and explores women's participation in the political and physical conflicts between proslavery and antislavery settlers.

Oertel goes on to examine northern and southern definitions of "true manhood" and how competing ideas of masculinity infused political and sectional tensions. She concludes with an analysis of miscegenation--not only how racial mixing between Indians, slaves, and whites influenced events in territorial Kansas, but more importantly, how the fear of miscegenation fueled both proslavery and antislavery arguments about the need for civil war.

As Oertel demonstrates, the players in Bleeding Kansas used weapons other than their Sharpes rifles and Bowie knives to wage war over the extension of slavery: they attacked each other's cultural values and struggled to assert their own political wills. They jealously guarded ideals of manhood, womanhood, and whiteness even as the presence of Indians and blacks and the debate over slavery raised serious questions about the efficacy of these principles. Oertel argues that, ultimately, many Native Americans, blacks, and women shaped the political and cultural terrain in ways that ensured the destruction of slavery, but they, along with their white male counterparts, failed to defeat the resilient power of white supremacy.

Moving beyond a conventional political history of Bleeding Kansas, Bleeding Borders breaks new ground by revealing how the struggles of this highly diverse region contributed to the national move toward disunion and how the ideologies that governed race and gender relations were challenged as North, South, and West converged on the border between slavery and freedom.

A native of Kansas City, Kristen Tegtmeier Oertel is an associate professor of history at Millsaps College in Jackson, Mississippi.