Skirmisher: The Life, Times, and Political Career of James B. Weaver 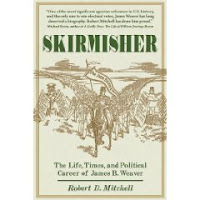 by Robert B. Mitchell

From the publisher:
Outlining the career of a politician whose two campaigns for the White House helped change the course of American politics, this in-depth study explores the religious convictions of James B. Weaver and the role they played in his political contributions. Offering a panoramic view of some of the great events of the 19th century—the California Gold Rush, the Civil War, and presidential politics, from Abraham Lincoln to the rise of William Jennings Bryan—this insightful and detailed account also sheds new light on the influence of third parties in presidential elections and the federal government’s role in reducing economic hardship.

Robert B. Mitchell is an assistant editor with the Los Angeles Times–Washington Post News Service. He lives in Woodbridge, Virginia.