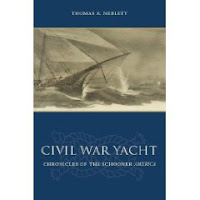 From the publisher:
From the race of the 100 Guinea Cup 1851, to a personal yacht, to an espionage boat for the Confederacy, to a blockader for the Union Navy, the trodden decks of this black schooner carries many stories.

The yacht America transports the reader from a shipyard in New York City across the Atlantic to the famous race of the Royal Yacht Squadron Queens Cup of 1851, now known as the Americas Cup Race. She became known as the Yankee schooner, raced with European yachts for several years, and in 1861 mysteriously sailed into Savannah, Georgia, carrying British colors and the Royal Victoria Yacht Clubs burgee. The Civil war had just begun. As the fifth owner, Henry Decie, an Irishman, becomes acquainted with the Jefferson Davis Administration. The yacht was prostituted to transport two Confederate officers to England. One officer was to serve as a secret emissary for President Davis, while the other officer was to purchase/build abroad iron-clad warships.

Henry Decie and his yacht, re-named Camilla, are captained across the Atlantic, to react with the Confederate urgent fares. However, he took time to race at the Isle of Wight.

Decie left the Confederate officers unceremoniously and sailed to Dixie - stopping at the Cape de Verdes, maybe to avoid Mason and Slidell. The yacht disappeared between late 1861 and early 1862. She had been scuttled by the Confederates in a creek hideaway. She was found and rescued by the Union Navy vessels far upriver beyond Jacksonville, Florida. America's celebrated life doesnt terminate in England, soon she was flying the colors of the USN as a naval blockader. For a little schooner her activities are full of intrigue. She is a proven winner of the waves, and holds an extremely important place in American yachting history.