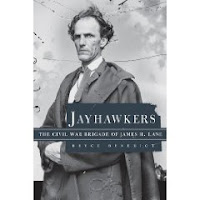 From the publisher:
No person excited greater emotion in Kansas than James Henry Lane, the U.S. senator who led a volunteer brigade in 1861-62. In fighting numerous skirmishes, liberating hundreds of slaves, burning portions of four towns, and murdering half a dozen men, Lane and his brigade garnered national attention as the saviors of Kansas and the terror of Missouri.

This first book-length study of the "jayhawkers," as the men of Lane's brigade were known, takes a fresh look at their exploits and notoriety. Bryce Benedict draws on a wealth of previously unexploited sources, including letters by brigade members, to dramatically re-create the violence along the Kansas-Missouri border and challenge some of the time-honored depictions of Lane's unit as bloodthirsty and indiscriminately violent.

Bringing to life an era of guerillas, bushwhackers, and slave stealers, Jayhawkers also describes how Lane's brigade was organized and equipped and provides details regarding staff and casualties. Assessing the extent to which the jayhawkers followed accepted rules of warfare, Benedict argues that Lane set a precedent for the Union Army's eventual adoption of "hard" tactics toward civilians.