Patriotic Treason: John Brown and the Soul of America 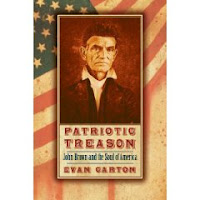 From the publisher:
John Brown is a lightning rod of history. Yet he is poorly understood and most commonly described in stereotypes--as a madman, martyr, or enigma. This illuminating biography brings him to life in scintillating prose and moving detail, making his life and legacy fascinatingly relevant to today's issues of social justice and to defining the line between activism and terrorism.

Evan Carton is the Joan Negley Kelleher Centennial Professor in Rhetoric and Composition at the University of Texas at Austin and the author of The Marble Faun: Hawthorne's Transformations and The Rhetoric of American Romance: Dialectic and Identity in Emerson, Dickinson, Poe, and Hawthorne.