General George H. Thomas: A Biography of the Union's "Rock of Chickamauga" 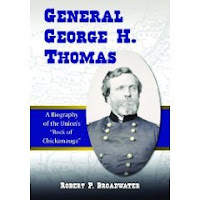 From the publisher:
One of the Civil War's most successful generals is heralded by military historians but never achieved the lasting fame of Grant, Lee, Jackson or Sherman. George Thomas's Southern birth, the ambition of fellow officers, and his action in the less-publicized Western Theater combined to keep him from attaining recognition. This comprehensive biography focuses on the military career that covered such battlegrounds as Chickamauga, Missionary Ridge and Nashville, as well as the political maneuvers that kept Thomas out of the spotlight.

Robert P. Broadwater has written more than 25 books of military history and more than 100 magazine articles dealing with the American Civil War and the Revolutionary War. He lives in Bellwood, Pennsylvania.