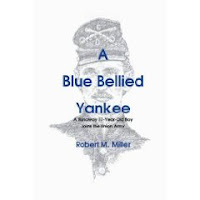 From the publisher:
On the morning of July 24, 1863 William Lucas, a seventeen year old boy, the youngest of four brothers, all of whom served in the Union Army, tied his shoe strings together, draped the shoes over his shoulder and set off barefoot for the Putnam (now part of Zanesville), Ohio post office to enlist in the Union Army’s 86th Regiment Ohio Volunteer Infantry. Portions of this unit were currently involved in the pursuit and subsequent capture of the Confederate raider, John Hunt Morgan at Salineville two days later.

The 86th moved by train and march to join in the bloodless capture of Cumberland Gap, September 9, 1863 and garrisoned the post until mustered out at Cleveland, Ohio, February 10, 1864. Three days later William Lucas enlisted in the 6th Ohio Volunteer Cavalry and joined the regiment March 8, 1864 at Warrenton, Virginia.

Subsequent to the surrender at Appomattox, the 6th Ohio served as an escort for Grant and as military police in Virginia before disbanding in Cleveland August 9, 1865.