The Addiction of Mary Todd Lincoln 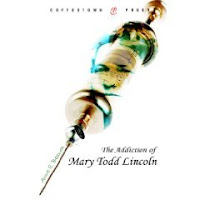 From the publisher:
Mary Todd Lincoln, wife of the president we have immortalized, has always been difficult for us to understand. She could appear poised and brilliant one moment yet rude and ugly the next. Sometimes competent and strong, able to entertain dignitaries from around the world, at other times she appeared dependent and weak. At times she seemed utterly beside herself with sobbing and screaming. Historians have mostly avoided saying very much about Mary Todd Lincoln except in reference to her husband, Abraham. To many it would seem that Mary Todd Lincoln is still an embarrassment in the tragic story of her martyred husband.

But Mary Todd Lincoln lived her own tragic story even before Abraham was murdered. She was an addict, addicted to the opiates she needed for her migraine headaches. Seeing Mary Todd Lincoln as an addict helps us understand her and give her the compassion and admiration she deserves. In her time there had been no courageous First Lady like Betty Ford to help people understand the power of addiction. There was no treatment center. In Mary Todd Lincoln’s time there were many addicts at all levels of society, as there are now, but it was a more socially acceptable condition for men to have than for women. More importantly, addiction was not very well understood, and it was often mistreated.

ANNE E. BEIDLER is a former director of Family House, a drug and alcohol rehabilitation center in Philadelphia, PA. She holds a doctorate in educational research from Lehigh University. In addition to The Addiction of Mary Todd Lincoln, she is also author of Eating Owen, a historical novel.