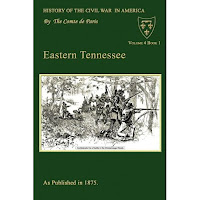 From the publisher:
The North had been victorious at Gettysburg and Vicksburg. Casualties on both sides were heavy. The draft riots of 1863 had been put down and the armies are once again on the move. Generals Rosencrans and Burnside were able to outflank General Bragg and take Chattanooga. Bragg would stand and fight at Chickamauga and the battle will prove costly for the Union forces...all eyes are on Eastern Tennessee.

From CWBN
Digital Scanning has been republishing segments of the Comte de Paris' History of the Civil War in America as standalone books. This is one of several released this year; to see a complete list, the reader should search on Comte de Paris on Amazon.