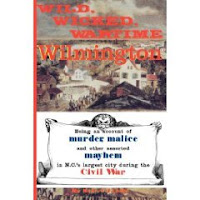 From the publisher:
When America went to war with itself, Wilmington was North Carolina's largest city. From the imposing grandeur of the Bellamy Mansion that overlooked a busy harbor, to the Wilmington & Weldon Railroad, which at the time boasted the longest rail line in the world, the port city was a bustling example of Southern industry. But when conflict came, the city became a pivotal player in the Confederate government's war efforts.

Paddy's Hollow boasted more than thirty saloons, while murders happened with alarming frequency. Prostitutes offered their services to the thousands of soldiers passing through town, while civilian and military authorities tried to keep a lid on it all. Local police were woefully inadequate to keep the peace against rioting troops who had witnessed the horrors of places like Chickamauga and Gettysburg. Doctors performed heroically to save lives, fighting disease, battlefield disfigurements, and death with too little of every kind of medicine and supplies. Civilians, railroads, and military officials all competed for too few resources, while offshore the Union blockade of what became the last open port of the Confederacy grew tighter with each passing day.

Robert J. Cooke's ten years of research has resulted in a picture of Wilmington that more closely resembles the Wild West's Dodge City than it does some genteel antebellum city.

Robert J. Cooke is a New Yorker by birth and an avid historian by nature. He relocated to Wilmington, N.C. after retirement. Cooke is a former tour guide at several Cape Fear area historical sites, while continuing with his interest in local Civil War history. Robert J. Cooke has also contributed articles and stories to several books, journals and magazines. The result of more than a decade of research, "Wild, Wicked Wartime Wilmington" is his first book.