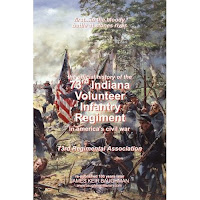 by the 73rd Regimental Association

From the publisher:
The men of the valiant 73rd Indiana Regiment were first to attack in the Battle of Stones River at Murphreesborough. They lost a third of their men in that fight, listed as one of the ten bloodiest battles of America's Civil War. Firing outdated 1842 smoothbore Springfield Muskets these hearty boys blasted their way far behind enemy lines for an entire week of running battles during the Raid of Streight's Brigade. A powerful story - it is not well known, but recorded by early historians as the most combative small-scale raid of the War. The 73rd was at the battle of Perryville, KY., and played a vital role in the last battles of Alabama forts at Athens and Decatur. They fought at Tuscumbia, Blountsville, Gadsden and Rome. And their officers knew famed Libby Prison at Richmond all too well. Their history is a fascinating cameo of the Civil War in it's western arena...a poignant description of individual soldiers, the incredible heroism they gave...and the suffering they lived through day by day...1862 to 1865.