William Francis Bartlett: Biography of a Union General in the Civil War 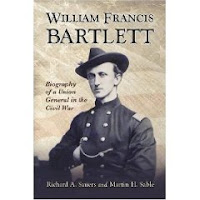 by Richard A. Sauers

From the publisher:
Frank Bartlett, the subject of this biography, was an indifferent student at Harvard when the Civil War began in 1861 but after he joined the Union army he quickly found that he had an aptitude for leadership and rose from captain to brevet major general by 1865. Over the course of the war he was wounded three times (one injury resulted in the loss of a leg), but he remained on active duty until he was captured in 1864. His political stance gained him some national fame after the war, but he struggled with repeated business stress until tuberculosis and other illnesses led to his early death at age 36.

Richard A. Sauers is the executive director of the Packwood House Museum in Lewisburg, Pennsylvania. He has written more than twenty books about the Civil War period. Martin H. Sable, a retired professor from the University of Wisconsin, Milwaukee, lives in Mequon, Wisconsin.