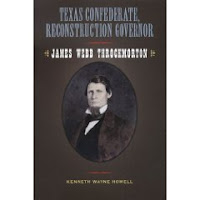 From the publisher:
Of the 174 delegates to the Texas convention on secession in 1861, only 8 voted against the motion to secede. James Webb Throckmorton of McKinney was one of them. Yet upon the outbreak of the Civil War, he joined the Confederate Army and fought in a number of campaigns. At war's end, his centrist position as a conservative Unionist ultimately won him election as governor. Still, his refusal to support the Fourteenth Amendment or to protect aggressively the rights and physical welfare of the freed slaves led to clashes with military officials and his removal from office in 1867.Throckmorton's experiences reveal much about southern society and highlight the complexities of politics in Texas during the latter half of the nineteenth century. Because his life spans one of the most turbulent periods in Texas politics, Texas Confederate, Reconstruction Governor, the first book on Throckmorton in nearly seventy years, will provide new insights for anyone interested in the Antebellum era, the Civil War, and the troubled years of Reconstruction.

"It is high time for such a well-written study. The last biography of Throckmorton came out more than sixty-nine years ago, and Howell's effort exceeds it on all counts . . . " -- James M. Smallwood, author, The Feud That Wasn't