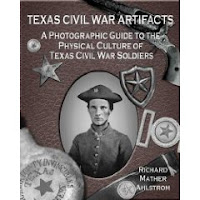 From the publisher:
One of the most popular literary subjects worldwide is the American Civil War. In addition to an enormous number of history buffs, there are tens of thousands of collectors of Civil War artifacts. In the last fifty years, several books have been written concerning the equipment associated with soldiers of specific Confederate states, but no book until now has ever chronicled the military equipment used by Texas soldiers.

Texas Civil War Artifacts is the first comprehensive guide to the physical culture of Texas Civil War soldiers.Texas military equipment differs in a number of ways from the equipment produced for the eastern Confederate states. Most of the Texas-produced equipment was blacksmithed, or local-artisan made, and in many cases featured the Lone Star as a symbol of Texas. Contemporary Civil War literature frequently mentions that most soldiers of Texas displayed the Lone Star somewhere on their uniform or equipment.In this groundbreaking volume, Richard Mather Ahlstrom has photographed and described more than five hundred Texas-related artifacts. He shows the diverse use of the Lone Star on hat pins, waist-belt plates, buckles, horse equipment, side knives, buttons, and canteens. In addition, the weapons that Texans used in the Civil War are featured in chapters on the Tucker Sherrard and Colt pistols; shotguns, rifles, and muskets; and swords. Rounding out the volume are chapters on leather accouterments, uniforms and headgear, and a gallery of Texas soldiers in photographs.This book will prove to be a valuable reference guide for Civil War collectors, historians, museum curators, reenactors, and federal and state agencies.

RICHARD MATHER AHLSTROM has lived in Texas since 1979. He graduated with an AB degree from Harvard University and completed the Executive Program of Amos Tuck School of Business Administration at Dartmouth College. He is retired from Diamond Shamrock Corporation, where he was a Senior Vice President and Chief Financial Officer. He has previously written a book on prehistoric American Indian pipes. Long interested in the Civil War and Texas soldiers, Ahlstrom has amassed a personal collection of Texas Civil War artifacts.