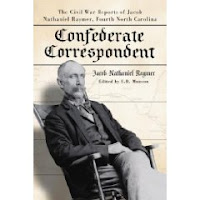 From the publisher:
Soon after North Carolina seceded from the Union in May 1861, Jacob Nathaniel Raymer enlisted in the Confederate Army. A young man with a talent for keen observation who had pledged to keep those back home informed of the movements of Company C and the Fourth Regiment, he faithfully wrote letters to the Carolina Watchman and the Iredell Express.

Unlike other contemporary correspondence, rather than being directed to an individual, Nat’s letters were intended for the broader audience of area newspaper readers and portrayed the dogged determination of the southern soldiers in a descriptive style that brought the war and all its harsh realities home to his readers. The collection is transcribed primarily from the two newspapers and is complemented by brief narratives that place the letters within the Fourth Regiment’s movements. Raymer’s postwar experience is also documented through his personal correspondence.