South Carolina's Military Organizations During the War Between the States: The Lowcountry & Pee Dee 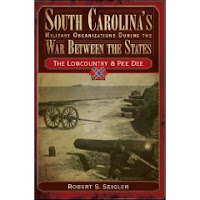 From the publisher:
In this anticipated four-volume series, author Robert Seigler presents a comprehensive review of South Carolina's Civil War troops in incomparable detail. Revealing the origination of military organizations from the three major geographical regions of the state, as well as those units whose men came from all parts of the state, Seigler outlines the frontline infantry, cavalry and artillery units, as well as militia, reserves and state troops that were critical to the Confederate efforts.

Volume I of this landmark series traces the military groups raised from Charleston and McClellanville, Sumter and Clarendon, Horry and Marion and parts in between.