Man of Douglas, Man of Lincoln 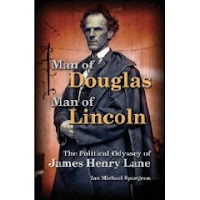 From the publisher:
In 1855, James Lane, this former Mexican War colonel and Indiana congressman, entered Kansas Territory to take a leading role in its quest for statehood, and over the next twelve years he followed a seemingly inconsistent ideological path from pro-Douglas Democrat to Free Stater to pro-Lincoln Republican. His fiery stump speeches and radical ideas won him a Senate seat along with an army of critics and a cloud that hangs over his reputation to this day. Spurgeon reassesses both Lane's position swings and his role in history, finding a consistency in his ideals that few historians have recognized. He argues that Lane was a steadfast champion of both the Union and his own conception of democratic principles.