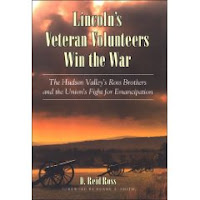 From the publisher:
Looking at the lives of the four Ross brothers, dedicated Union soldiers from upstate New York's Washington County, Lincoln's Veteran Volunteers Win the War offers a dramatic, in-depth account of struggle, devotion, family, and faith during the American Civil War. Three of the four brothers--Daniel, Melancton, and William--were among the two hundred thousand who enlisted for three years when the war broke out, and then reenlisted as battle-hardened Veteran Volunteers. The fourth brother, John, would sign up as soon as he reached the age of eighteen, and fought until the war's end. The Ross brothers and their regiments fought in nearly every major engagement of the conflict, including Chancellorsville, Gettysburg, Chickamauga, and Missionary Ridge.

Using public documents, regimental histories, and personal sources that comprise hundreds of letters and personal narratives written by the Ross brothers and many other soldiers, author D. Reid Ross (grandson of Daniel) provides detailed and vivid descriptions of soldiers' attitudes toward President Lincoln and emancipation, courage and performance on the battlefield, the hardships of army life, the role of the Veteran Volunteers, and the Grand Review in Washington, D.C. after the end of the war. Also included is the story of captured Confederate President Jefferson Davis's journey to prison as described by his guard, Daniel Ross. Demonstrating the Ross brothers' unflinching belief in home, family, country, and duty, and, as the culmination of thirty years of research, this fascinating book offers a view of the Civil War that is expansive, personal, and inspirational.

"Ross's extensive and intensive exploration of both primary and secondary sources enabled him to take his family story and transform it into a meaningful statement about both the Civil War and this nation's divided psyche. His willingness to travel thousands of miles in order to access hundreds of primary sources moves this history beyond another run-of-the-mill `I found these letters in the attic' chapter in Civil War history." -- Joel M. Jones, President Emeritus, Fort Lewis College

"As a general reader, I have been captured and moved by the author's narrative powers and the brilliance of his battlefield scenes. The convincing portraits of individual soldiers and officers carry the reader throughout the book." -- Jurgen Herbst, Professor Emeritus of History at the University of Wisconsin