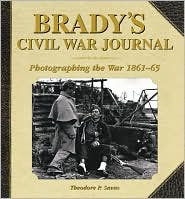 From the publisher:
Mathew Brady and his ground breaking team of assistants risked life and liberty to capture up-close images of the fury of the American Civil War and its aftermath. Brady actually got so close to the action during the First Battle of Bull Run that he only narrowly avoided capture. Brady's Civil War Journal chronicles the events of the war by showcasing a selection of Brady's moving, one-of-a-kind images and describing each in terms of its significance. The text by Theodore P. Savas, authoritative expert on the Civil War, adds context to Brady's memorable photographs, creating an unrivaled visual account of the most costly conflict in American history as it unfolded. 150 b/w photographs.

Theodore P. Savas has written, ghostwritten, edited, or co-authored several dozen Civil War books over the past 15 years and has written over 20 articles that have appeared in a wide variety of journals and magazines, led tours around Civil War battlefields, and given lectures all over the country on the subject. He lives in El Dorado Hills, California.