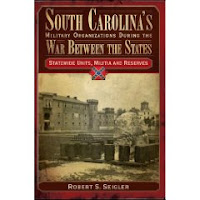 From the publisher:
Volume IV of this landmark series traces the military groups raised from all parts of the state from Oconee to Horry to Beaufort as well as militia and reserves.