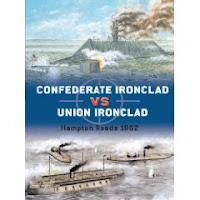 From the publisher:
This is an Osprey color illustrated series title.

The ironclad was a revolutionary weapon of war. Although iron was used for protection in the Far East during the 16th century, it was the 19th century and the American Civil War that heralded the first modern armored self-propelled warships. With the parallel pressures of civil war and the industrial revolution, technology advanced at a breakneck speed. It was the South who first utilized ironclads as they attempted to protect their ports from the Northern blockade. Impressed with their superior resistance to fire and their ability to ram vulnerable wooden ships, the North began to develop its own rival fleet of ironclads. Eventually these two products of this first modern arms race dueled at the battle of Hampton Roads in a clash that would change the face of naval warfare.

Fully illustrated with cutting-edge digital artwork, rare photographs and first-person perspective gun sight views, this book allows the reader to discover the revolutionary and radically different designs of the two rival Ironclads - the CSS Virginia and USS Monitor - through an analysis of each ship's weaponry, ammunition and steerage. Compare the contrasting training of the crews and re-live the horrors of the battle at sea in a war which split a nation, communities and even families.

Ron Field is Head of History at the Cotswold School in Bourton-on-the-Water. He was awarded a Fulbright Scholarship in 1982 and taught history at Piedmont High School in California from 1982 to 1983. He was associate editor of the Confederate Historical Society of Great Britain, from 1983 to 1992. He is an internationally acknowledged expert on US Civil War military history, and was elected a Fellow of the Company of Military Historians, based in Washington, DC, in 2005. The author lives in Cheltenham, UK.